Neurofeedback is a type of biofeedback. Neurofeedback software provides visual and auditory feedback, to teach the brain how to boost the brain’s innate ability to self-regulate, achieve homeostasis and optimal functioning. Neurofeedback training is a non-invasive treatment in which sensors placed on the scalp monitor an individual’s brain wave electrical activity while immediately comparing these signals with normative databases on a high-speed computer. Using sophisticated computerized programs, patients learn how to both recognize and synchronize brainwave patterns towards normalcy. What we have learned from neurofeedback is that when the brain is given access to itself and information about itself, incredible changes can occur. These changes become relatively permanent by the subsequent neurochemical and physiological changes and “rewiring of the brain” produced by neurofeedback. Neurofeedback software provides visual and auditory feedback, using operant conditioning to teach the brain how to regulate itself. The most obvious comparison is Pavlov’s famous experiment with conditioning dogs (classical condition) wherein meat was used as the reward to change behavior. Neurofeedback uses “rewards” to “condition brain behavior” which in turn “changes human behavior”. There are several kinds of neurofeedback modalities including:

Each patient’s neurofeedback protocol is determined by the modality that will best address reducing their symptoms while enhancing brain optimization, their QEEG brain mapping results and their diagnostic evaluation and consultation.

There are several types of Neurofeedback modalities each with its specific methodology, assessment and purposes at addressing cognitive and behavioral symptoms while enhancing optimal brain functioning. Neurofeedback is not a “one size fit’s all” therapy intervention. Assigning a neurofeedback modality is specific upon an individual’s brain wave morphology (evaluated during the QEEG Brain Mapping procedure) and the targeted neurophysiological symptoms one is experiencing. 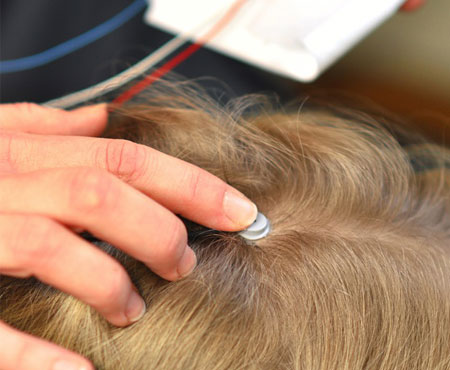